Measuring indoor carbon dioxide levels is the first thing I do to ensure that a home is healthy. Our state-of-the-art air quality meters test for both carbon dioxide and carbon monoxide in parts per million (ppm) as part of every indoor air quality inspection. Elevated levels of carbon dioxide indicate that an insufficient amount of fresh, outdoor air is being delivered to the occupied areas of the building. This also indicates that other pollutants in the building may exist at elevated levels since there is not enough fresh air to dilute them. Because of this, toxins build up and people get sick. 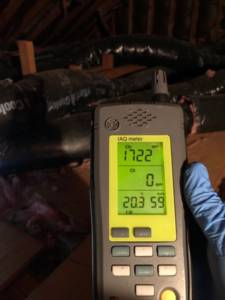 What Is Carbon Dioxide?

Carbon dioxide (CO2) is a colorless, odorless gas formed by metabolic activity (humans and other animals exhale carbon dioxide when they breathe), combustion activities, and motor vehicles in garages. In solid form, it is called dry ice. Though carbon dioxide is not toxic itself, the amount found in the indoor environment is used as an indicator for human comfort. Since carbon dioxide is an unavoidable, predictable, and easily measured product of human occupancy, it is used as a marker for whether pollutants introduced from humans or other sources in the building are likely to become a nuisance or a hazard. CO2 is mostly a threat to health when the concentration is high enough to displace the oxygen, which can lead to suffocation in a confined space. 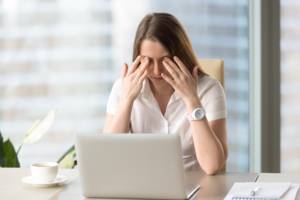 Occupants may experience health effects in buildings where CO2 is elevated, but the symptoms are usually due to the other contaminants in the air that also build up as a result of insufficient ventilation. At high levels, the carbon dioxide itself can cause headache, dizziness, nausea and other symptoms. This could occur when exposed to levels above 5,000 ppm for many hours. At even higher levels of CO2 can cause asphyxiation as it replaces oxygen in the blood-exposure to concentrations around 40,000 ppm is immediately dangerous to life and health. CO2 poisoning, however, is very rare.

Carbon Dioxide Levels and Your Health

Keeping levels less than 700 ppm above the outdoor air concentration is an indication that sufficient outdoor air is being brought into the environment. This will help control other pollutants at acceptable levels. IAQ research has shown that building occupant complaints will be observed as the indoor concentration of carbon dioxide increases about 700 ppm to 800 ppm above the outside level. Carbon dioxide levels are an indicator that other pollutants from indoor sources may exist at irritating and observable levels.

The Link Between Indoor Air Quality and Eczema