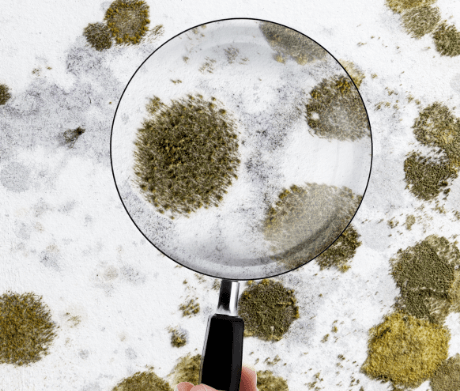 Out of all of the various genera of mold present on Earth, Aspergillus is both the most common and one of the most worrying. So far, over 200 different species of Aspergillus have been identified all around the world. Mold experts believe that Aspergillus molds are the most common type of fungi found in the natural environment.[1] Though many of these species are either harmless or mildly allergenic, approximately 16 of them are known to pose a serious health risk to humans and have been linked to many cases of both chronic and acute disease and infection (Aspergillosis). According to MBL Labratories, Aspergillus is of particular concern in indoor environments due to its unique ability to penetrate deep into the lungs. “Many species of Aspergillus produce dry, hydrophobic spores that are easily inhaled. Due to their small size, about 70 % of spores of A. fumigatus are able to penetrate into the trachea and primary bronchi and close to 1 % into alveoli.”[2]

Species of Aspergillus which have been verified as dangerous to humans include:

Many of the above species of Aspergillus are, fortunately, rare in indoor environments; however, several types—Aspergillus niger, Aspergillus flavus, Aspergillus fumigatus—are known to be common in residences and public buildings which provide the right conditions for their growth.

Aspergillus niger is incredibly prolific thanks to the fact that it can grow on a large variety of substances; indeed, most experts believe that Aspergillus niger is the most common form of Aspergillus in the world.[3]Aspergillus niger has even been found in environments where there are few nutrients present. It is one of the most frequently-identified sources of “black mold”. Aspergillus niger is black in color, with a white or yellow layer beneath its surface, in indoor environments owing to its ability to flourish on damp walls and other surfaces. (It is not, however, the most dangerous of the infamous toxic black molds; that title belongs to the even more poisonous Stachybotrys chartarum.)[4]

Though it is the most common household mold of concern, it is only the third most likely out of all types of Aspergillus to infect humans. However, that said, Aspergillus niger still leads to a significant number of serious infections each year. It is capable of forming fungal ball in the lungs of humans (like a handful of other varieties of Aspergillus) which continues to grow over time, causing a range of uncomfortable and dangerous symptoms.

Aspergillus flavus is best known for producing the carcinogenic mycotoxin “aflatoxin”; commonly occurring in nuts and cereal grains, consumption of this mycotoxic mold has been directly linked to the development of liver cancer in humans and other mammals. However, Aspergillus flavus is also a risk when inhaled via indoor air as it can cause serious Aspergillosis infections (and it is second only to Aspergillus fumigatus in its ability to infiltrate the lungs of humans).[5]Aspergillus flavus has a yellow-green surface with a gold or red-brown layer underneath.

Though mold-related illness is often associated with “black mold” thanks to the commonness of Aspergillus niger and the extreme illness caused by Stachybotrys, this most potent of all Aspergillus species is actually a blue-green (or slightly grey) mold with a white or tan under-layer. (Aspergillus fumigatus is therefore a perfect example of why it’s important to treat any kind of mold found indoors as a serious issue, regardless of its color, and have an inspection conducted immediately.)

When present in indoor environments, Aspergillus can cause the following issues:

Allergic reactions: Like many types of mold, Aspergillus is strongly associated with allergenic symptoms such as:

Certain strains of Aspergillus can also cause life-threatening allergic reactions (usually after chronic exposure), resulting in serious breathing difficulties and lung damage. These molds are also very dangerous to asthmatic individuals; people with asthma have been found to be particularly sensitive to Aspergillus spores.

Some species of Aspergillus produce mycotoxins, such as the aforementioned aflatoxin (associated with Aspergillus flavus), usually as a reaction to triggers in their environment. Mycotoxins have both acute effects (e.g. risk of miscarriage) and chronic implications, the most worrying of which for many people is cancer: Many mycotoxins are highly carcinogenic. Mycotoxins also cause long-term, irreversible neurological and immunological damage. Though scientists have been able to define how much mycotoxin a human can ingest before increasing his or her risk of illness, there is currently no known “safe” limit for airborne mycotoxin exposure.[7]

According to mold authority Mold Help.org, indoor air is an excellent conduit for mycotoxin transport: “Mycotoxins are examples of chemical substances that molds create generally as secondary metabolites, thought to possibly play a role in either helping to prepare the substrate on which they exist for digestion, as defense mechanisms, and some have suggested that they may be produced when the organisms are under stress, which could be related to competition/defense, or simply due to inhospitable environmental conditions. The mycotoxins, which are also neurotoxins (a toxin that is determined to cause neurological damage), most commonly reach people from the air, via spores from the molds in question. They are also found in small particulates at times which may often represent mold dust, small particles of mold that has dried and turned to dust.”[8]

Infection from Aspergillus occurs when people and animals inhale a significant amount of spores, allowing the mold to begin to grow inside them (usually in the lungs). This kind of infection, called “Aspergillosis” primarily affects the young, the elderly, and immunocompromised individuals, but can potentially strike anyone exposed to a dense enough concentration of spores. The term “Aspergillosis” does not refer to one single type of disease, but rather to several distinct syndromes, including: Allergic bronchopulmonary aspergillosis, acute invasive aspergillosis, and disseminated invasive aspergillosis.[9]

Allergic bronchopulmonary aspergillosis (ABPA), which is most frequently caused by Aspergillus fumigatus, is not a true “infection” but rather a disease which occurs when a person’s immune system becomes hypersensitive to Aspergillus spores, producing a range of chronic respiratory symptoms, such as:

Those with cystic fibrosis or asthma are particularly vulnerable to allergic bronchopulmonary aspergillosis; as many as 5% of all asthmatics will suffer this disease at some point in their life.[10]

If you suspect you have allergic bronchopulmonary aspergillosis, you will need to have tests conducted (x-rays, skin tests or blood tests) and have your home tested for mold. If you are diagnosed, you will be treated with steroids (to be taken orally or via nasal spray) and/or an antifungal drug known as itraconazole. However, only complete professional removal of the mold in your home can truly alleviate this condition.

This disease is a true infection caused by Aspergillus spores entering the body and growing in existing cavities in the lungs (resulting from illnesses like tuberculosis and other damage). Once the Aspergillus spores have gained a foothold in the lungs, they grow into a fungal ball (called an aspergilloma or mycetoma) which then dispenses toxins and allergens directly into the person’s body. Often Aspergilloma is asymptomatic at first, but once the fungal ball or balls have begun to grow it typically causes symptoms such as:

After an Aspergilloma has been diagnosed (usually through x-rays or blood tests), it will be treated either through medication (such as itraconazole or voriconazole) or surgery. Once again, however, the only way to truly treat this illness and to prevent it from reoccurring is to have one’s home cleansed of all mold.

Though only a lab test can truly verify the identity any variety of mold, you can suspect that a mold is from the Aspergillus genus if it has a powdery texture and an extremely high growth rate. According to the website Blackmold, “After one week of growth at around 25 degrees Celsius an Aspergillus colony will generally be 1-9 cm in diameter, however Aspergillus glaucus and Aspergillus nidulans grow more slowly and will generally be 0.5-1 cm after the same time.”

Because Aspergillus molds can thrive anywhere there is oxygen and moisture, they can potentially be found throughout the home; however, it should be noted that they have a particular preference for carbon-rich materials such as fabric and building materials. Also, you should keep in mind that some types of Aspergillus can survive even where there is very little moisture (these are known as xerophilic molds), so depending on the climate where you live, the humidity in the air may be enough to sustain an Aspergillus infestation without the presence of obvious moisture sources (e.g. a leaky roof or damp basement).

Aspergillus is often found growing in compost heaps, on houseplants, and in stored starchy food; it also has a noted preference for air conditioners and indoor ventilation systems (making it a particular concern in hospitals and office buildings, where it often flourishes). Damp walls, such as those damaged by flooding, also provide a haven for Aspergillus.

If you suspect that you have Aspergillus genus molds growing in your home, contact an indoor air quality expert immediately and have him or her conduct tests; due to the fact that some types of Aspergillus produce toxins which are capable of causing permanent damage to the body, it’s essential that you not wait or attempt to treat a suspected mold infestation yourself (this increases the risk of inhalation).

[2]      Aspergillus: Should It Worry You? http://www.moldbacteria.com/mold/aspergillus.html